Here’s a little Bessie Smith singin’ an old blues number to get us in the mood:

Give Me A Pigfoot (And A Bottle Of Beer)

You know, sometimes a girl just can’t get a head! Therein lies my problem; no pig head for me right now.

Born and raised in south Louisiana, I LOVE hogshead cheese and it is in very short supply (read nonexistent) in Tennessee so I was totally thrilled with this month’s  Charcutepalooza  binding challenge. Like Mrs. Wheelbarrow, I’ve had a toe cheese experience although I couldn’t decide if it should properly be called toe cheese or butt cheese! Hmmmmm! Moving on…many thanks to Pink Guitar Farm for helping me in my quest for a pig’s head and I’m looking forward to this fall when I will be fortunate enough to get one of their Red Wattle/Berkshire pigs. Check ’em out; they’re doing an awesome job!

I’ve always been a bit envious of all of the ethnocentric people that make up the melting pot that defines America and kinda felt left out. Even though my heritage embodies so much of the melting pot, I never felt that I had a special identity – until I moved away. So many of the things I took for granted were, I realized, very unique once they weren’t part of everyday life anymore. Crawfish, crab and shrimp boils from as far back as I can remember. red beans and rice, black beans, frying fish in the carport, arroz con pollo, roast pork and cochon du lait, Dad and our next door neighbor sitting outside shucking oysters, Rock n’ Bowl, Mardi Gras and Jazz Fest! I miss it all but at the same time I love where I am and what I’m doing. All of those things are an integral part of who I am and help form the person I’m becoming as I move along in my quest to both go forward and look back.

When you get to New Orleans, if you are lucky enough to escape the tourist venues and get to experience the real NO, one of the first oddities you might notice is that a lot of the local neighborhood joints have this weird mix of Italian food and seafood. When you look at NO history, though, it makes total sense. There’s the French influence that tends to dominate and, of course, the Acadians that made their way down from Nova Scotia but there is also the Creole heritage from the Caribbean and Africa and a huge Italian, mostly Sicilian, influence as well. This is the melting pot from which I am drawing this month and I am so proud to be able to share it and keep it alive.

Beef Daube, the classic French braised beef larded with pork fat comes to NO, gets stirred around a bit, flirts with Italian red gravy and becomes Creole Beef Daube served over spaghetti. Using a nice chuck roast, it has a lovely gelatinous red-brown gravy. BUT… throw in a couple of pig feet and it becomes Beef Daube Glace, the city cousin of the country hogshead cheese.

Unctuous is not a word I throw around in everyday conversation…until now, thanks to Fergus Henderson, who introduced me to Trotter Gear. He said, “Unctuous potential: Trotter gear is your gastronomic friend.” Huh? What exactly IS trotter gear and how can it have the potential to add unctuousness? This challenge has taught me the true meaning of unctuous and also introduced me to Fergus Henderson and Trotter Gear; all of which are amazing. I can’t say it enough, “Trotter gear is your friend!”  It gives you the ability to instantly add body and wonderful mouth-feel to a sauce.

Pig feet (however many you can get hold of), rinsed and either shaved or singed to remove all hair (I promise it gets better after this!)

Simmer until they are falling apart, about 4 hours, skimming off any foam that rises to the surface.  Let them cool slightly and pick all of the meat off of them. It should be burning your fingers! If it gets too cool, it will get so sticky that you can’t work with it. Strain the remaining stock, mince the meat and skin very finely and add it back into the stock. Chill and remove all of the fat that has solidified on the surface. 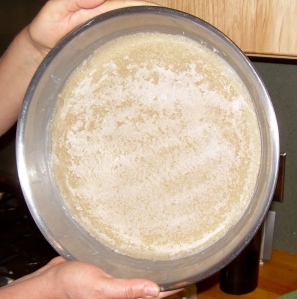 Trotter gear in all of its gelatinous glory

It’s now ready to be added to anything that needs to have its unctuous potential enhanced. Freeze any that won’t be used in the next week or two. This stuff is so fabulous that I gave some to my Dad for his birthday! Really.

What brought me to Trotter Gear in the first place was the fact that most recipes for Beef Daube Glace use packaged gelatin or that pesky, unobtainable pig’s head.  I went back to the Picayune’s Creole Cookbook and still couldn’t figure out how many packages of gelatin equal one pig’s foot. Trotter Gear gave me the ability to work out the proportions and adjust them as needed. Just like in sausage-making, a taste test is necessary but this time, instead of just taste testing, you also needed to test the “set”.  A little chill time in the freezer will let you know if it’s too firm (rubbery) or too loose to be able to slice.

The chuck is browned and the mise is ready- take a gander at those gorgeous Black Krim toatoes from the garden!

Melt your fat of choice in a Dutch oven big enough to hold all ingredients. Brown roast on both sides, about 5-8 minutes on each side and remove from pan.

If needed, add enough water to barely cover the meat

Cover and braise at 350 until tender enough to pull apart with a fork, about 3 hours, turning over after 1 1/2 hours. When cool enough to handle, remove any fat, gristle or other icky bits, leaving some of the meat in medium-sized pieces and shredding the rest. 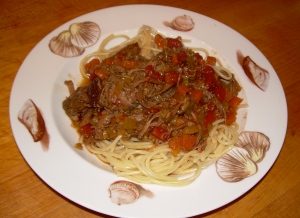 Strain the pan juices, discarding the solids, combine with the meat and refrigerate overnight. The next day skim as much fat from the surface of the meat as possible. It should be fairly gelatinous, especially if you used good homemade beef stock. Taste for seasoning. This should give you a pretty good idea about salt and spice. Remember that you need a little extra punch for cold dishes!

Place the beef over a medium fire to warm, add about a cup of trotter gear and heat just until all is melted. Take about a tablespoon of meat + juice and put in the freezer until set, about 20 minutes. Taste for seasoning and set. The goal is for it to set enough to slice but still be soft enough to melt in your mouth. If it’s too firm, add a little stock or water. If it’s too loose, add more trotter gear and simmer to reduce the liquid a bit more. Repeat the taste and set test and readjust the consistency again, if necessary.  The goal here is rich, slightly spicy, beefy… unctuousness!

Oregano leaves, chives and jalapeno peppers from the garden to jazz it up a little.

This is part where you get to learn from my mistakes! Fill the mold very carefully so you don’t disturb all of those tiny garnishes that you so painstakingly glued down with trotter gear then press plastic wrap over the surface and smooth it out so it will lie flat on your serving dish. Allow to set overnight then carefully dip the mold in warm water and invert onto a serving platter. Much to my relief, the unmolding worked amazingly well. 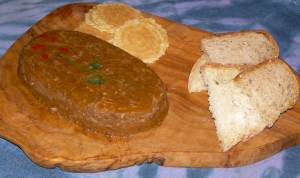 This one's heading to Louisiana as part of the birthday package!

My favorite size! Perfect for a party.

Give me a pigfoot and a bottle of beer